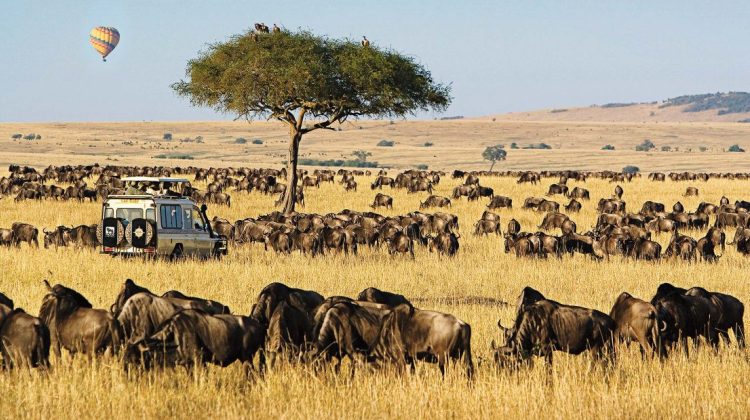 Olpajeta Nakuru and Masai Mara. This is one of the destinations that has been in your bucket list? Let Incredible Kenya Adventures help you. It will help you fulfill your dream with our five-day safari of Ol Pejeta, Lake Nakuru and the Masai Mara. Ol Pejeta is Africa’s largest Black Rhino sanctuary as well as being home to a number of chimpanzees. If you time your safari right, when arriving at Masai Mara National Park you might be lucky enough to witness the Great Wildebeest Migration as they return from the Serengeti.

Scenic Lake Nakuru is Kenya’s most popular national park. The park’s main feature is a large, shallow lake supporting great birdlife, including big flocks of pelicans and variable flocks of flamingos. The lake was once famous for its flamingos, however, since 2012, conditions have become unfavorable for these birds and most have moved to other Rift Valley lakes.

Lake Nakuru offers easy wildlife viewing of most big safari animals with the exception of elephants. Black and white rhino were re-introduced in the 1990s and have bred to healthy populations. The white rhino is usually easy to see on the lakeshore. Rothschild giraffe, buffalo and hippo are numerous as well. Lucky visitors might see lions, which occasionally climb trees. Leopard is present, but not often encountered.

Ol Pejeta is one of the prime sanctuaries of Laikipia Plateau and all of the Big Five are present. Its highlights include the largest black rhino sanctuary in East Africa; a population of southern white rhino; a refuge for the last two northern white rhino left in the world; and Sweetwaters Chimpanzee Sanctuary, housing orphaned and abandoned chimpanzees.

Pick from your hotel at 8:00 AM airport and drive to Ol Pejeta Conservancy. Arrive for lunch. After lunch, game drive within the Conservancy. Ol Pejeta is East Africa’s Largest Black Rhino Sanctuary. The only place in Kenya to see chimpanzees and holds some of the highest predator densities in Kenya. Dinner and overnight at –

After breakfast drive to the floor of the Rift Valley. A stop take photos at the Great Rift Valley viewpoint –after which continue to Lake Nakuru. Start game drive as you drive towards the lodge. Arrive for lunch -. After this, game drive in the park. Besides the flamingos that the lake is famous for, there are approx 400 other species of birds visiting the lake. Also, many species of game can be found in the park including the introduced Rothschild’s giraffe, black and white rhino, waterbuck, reedbuck, lion, buffalo, leopard, baboon and many species of plains game. Dinner and overnight at -Lodge or Camp.

The whole day is dedicated to game spotting in this sprawling reserve. You can watch a lion, cheetah, or leopard hunting or feast on its kill. The option of a visit to a Masai village or a hot-air balloon ride that starts at 06.00 am and ends with a Champagne breakfast on the plains. What an exhilarating experience! All meals and overnight at the -Lodge or Camp.

The full-day is dedicated to game spotting in this sprawling reserve. You can spend one-day trekking in Masai Mara with a Masai guide. You can watch a lion, cheetah, or leopard hunting or feast on its kill.

The option of a hot-air balloon ride that starts at 06.00 am and ends with a Champagne breakfast on the plains. What an exhilarating experience!

All meals and overnight at -Lodge or Camp

After breakfast, another game drive until the mid morning after which drive to Narok town for lunch. After lunch proceeds to Nairobi and transferred to your hotel or airport.

Catered for as below:


Uncatered for as below: