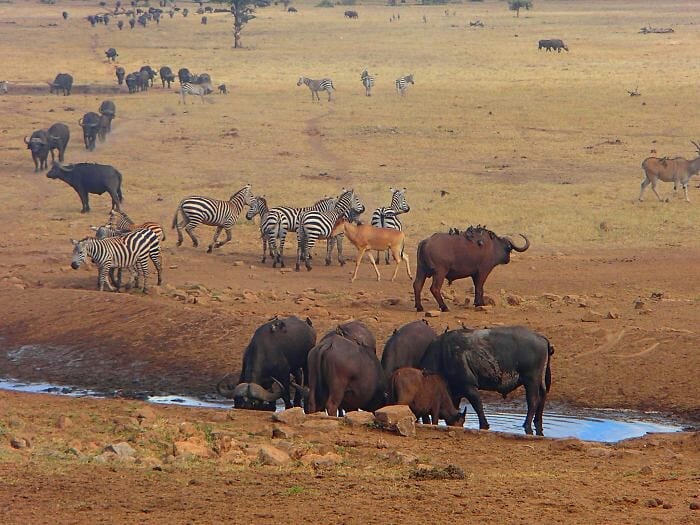 Tsavo West National Park covers approximately 30 per cent of Kenya’s park area, and contains a diversity of habitats, wildlife and a mountainous scenic landscape. The park is a vast expanse of savanna stretching from Mtito Andei, along the Mombasa-Nairobi road and south to the Tanzanian border.

The north-eastern boundary along the highway adjoins Tsavo East National Park, but Tsavo West has a more varied topography and a more diverse array of habitats than its neighbourThis part of the park has a lot of height, dry plains and ancient lava fields. One of the main Attractions of this part is Mzima Springs, a series of natural springs that Attract much wildlife. Many animal species One thing Both Sides of the Tsavo National Park in common, the great diversity of species. Such large mammals as elephants, hippos, buffalos, zebras and giraffes as well as many small animals and up to 500 different species live together on the plains or down the park.

There are numerous rocky outcrops and ridges and part of the park, towards the Chyulu Hills, is of recent volcanic origin with lava flows and ash cones including the Shetani lava flow, an example of a recent volcano.

In the far south-western corner on the Kenya Tanzania border is Lake Jipe, part of which is in the park.

This very attractive lake is fed by runoff from Mount Kilimanjaro and the North Pare mountains. At Mzima Springs, in the North of the park, water that has filtered underground from the Chyulu Hills gushes from below a lava ridge into a series of clear pools.

Visitors have an opportunity to view animals under water through a glass house, man eaters – caves where 2 lions were shot in Tsavo West by Col. Patterson, railway bridge forms boundary.